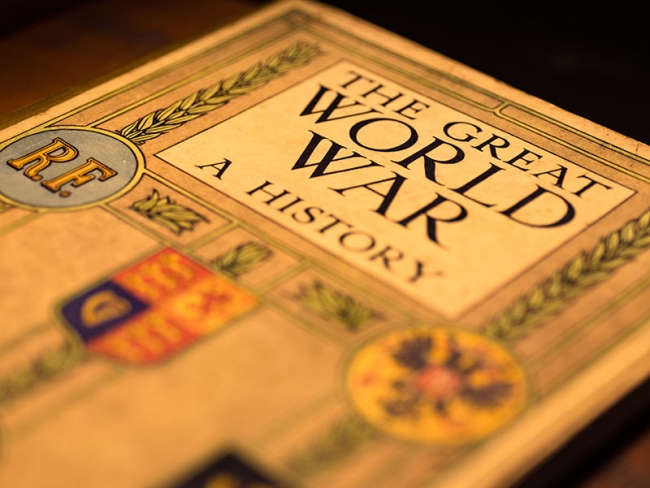 Bibliographic records of World War I are part of the Oswaldo Cruz Collection. It includes ten books and pamphlets on the topic. Photo: Jeferson Mendonça.

Books such as 'The Great World War, A History' suggest an interest in news and information about the early period of the conflict. Photo: Jeferson Mendonça.

Other noteworthy titles are "1815-1915, from the Congress of Vienna to the war", "How Austria-Hungary waged war in Serbia", and "Pro-Germania". Photo: Jeferson Mendonça.

A pamphlet brings information on RMS Lusitania, a British ocean liner sunk on 7 May 1915 by a German U-boat 18 km off the southern coast of Ireland. Photo: Jeferson Mendonça.

"Official documents relating to the European War of 1914": an excerpt narrates the killing of Archduke Franz Ferdinand and his wife, the Duchess of Hohenberg. Photo: Jeferson Mendonça.

In this racist manifesto, military commanders and civilians narrate the murder of war casualties by foreigners, especially Africans hired by the Allied armies. Photo: Jeferson Mendonça. 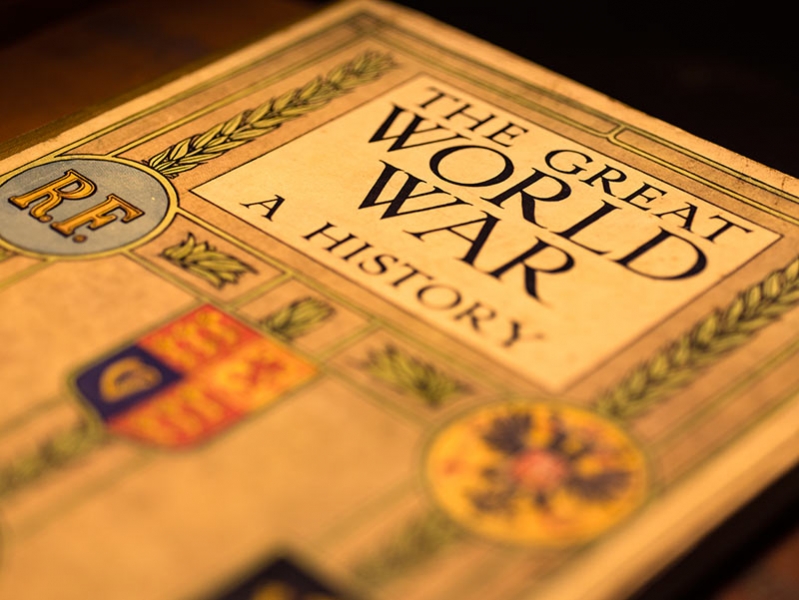 Bibliographic records of World War I are part of the Oswaldo Cruz Collection. It includes ten books and pamphlets on the topic. Photo: Jeferson Mendonça.

Books such as 'The Great World War, A History' suggest an interest in news and information about the early period of the conflict. Photo: Jeferson Mendonça.

Other noteworthy titles are "1815-1915, from the Congress of Vienna to the war", "How Austria-Hungary waged war in Serbia", and "Pro-Germania". Photo: Jeferson Mendonça.

A pamphlet brings information on RMS Lusitania, a British ocean liner sunk on 7 May 1915 by a German U-boat 18 km off the southern coast of Ireland. Photo: Jeferson Mendonça.

"Official documents relating to the European War of 1914": an excerpt narrates the killing of Archduke Franz Ferdinand and his wife, the Duchess of Hohenberg. Photo: Jeferson Mendonça.

In this racist manifesto, military commanders and civilians narrate the murder of war casualties by foreigners, especially Africans hired by the Allied armies. Photo: Jeferson Mendonça.

World War I (1914-1918) began with a regional clash between the Austro-Hungarian Empire and Serbia, on July 28, 1914. After Austria-Hungary extended its declaration of war to the Russian Empire, on August 1, 1914, the conflict expanded into armed combat across Europe. The fighting eventually reached beyond, engulfing 32 nations worldwide, organized in two blocs: on the one side, the Allies—initially comprising Great Britain, France, and the Russian Empire (known as the Triple Entente), later joined by 25 other countries, including Brazil—and, on the other, the Central Powers, made up of the German, Austro-Hungarian, and Ottoman empires and Bulgaria.

Once known as the War to End All Wars, World War I was unprecedented in many ways. Tens of millions of soldiers were mobilized, multiple lines of defense were established through trench warfare, and battlefields saw weapons that were radically new or had never before been produced on an industrial scale, ranging from lethal gases to submarines, airplanes, and tanks. The intense use of machine guns and heavy artillery also contributed to making this conflict one of the deadliest and most destructive in history. In technological terms, it was the first modern war, and it left a bloody toll. It is estimated that more than ten million died in combat while another twenty million were injured.

Traces of this tragic conflict can be found in Oswaldo Cruz’s personal library, which holds ten books and pamphlets on the topic, all with fewer than 50 pages, published in Portuguese, English, French, and German.

To judge by both date of publication (1914 and 1915) and subject matter, these writings suggest an interest in news and information about the early period of the conflict. One example is The Great World War, A History, released by The Gresham Publishing Company, in London. The library includes the first of this nine-volume collection, edited by Frank A. Mumby (1872-1954), journalist and historian of the book trade in England. Published in 1915 and 1916, the collection offers a detailed narrative of the era’s events, illustrated with photographs, maps, and plans. Because printing presented challenges then (especially the scarcity of paper), the volumes were available by subscription only.

Still, the quality of the copy of The Great World War found in the Oswaldo Cruz Collection is evident right from its cover, which is imprinted with the coats of arms of six countries: the French Republic’s, featuring the letters R.F.; the Russian Empire’s, represented by a double-headed eagle topped by three crowns, symbols of power and wisdom, with Saint George, patron saint of Russia, in its center; the United Kingdom’s, consisting of two sets of three lions, a single lion inside a frame of fleurs-de-lis, and a harp; the Serbian Empire’s double-headed eagle and shield; Belgium’s lion; and the Japanese Empire’s 16-petal chrysanthemum.

Two other noteworthy titles are 1815-1915 du congrés de Vienne a la guerre de 1915 [1815-1915, from the Congress of Vienna to the war of 1915] and Comment les Austro-Hongrois ont fait la guerre en Serbie [How Austria-Hungary waged war in Serbia]. The former was written by Charles Seignobos, a renowned French historian who specialized in the French Third Republic and was a member of the Human Rights League; the latter is by Rodolphe Archibald Reiss, a German-Swiss professor, writer, and pioneer in forensic science. Both works were published in 1915 by Armand Colin, a French publishing house founded in 1870 that was an early-twentieth-century leader in the area of education.

These two French works were part of a set of ten pamphlets published in the form of inexpensive brochures by the Committee for Studies and Documents on the War, formed in 1914 by a group of eminent French university intellectuals: Ernest Lavisse (president), Émile Durkheim (secretary), Charles Andler, Joseph Bédier, Henri Bergson, Émile Boutroux, Ernest Denis, Jacques Hadamard, Gustave Lanson, Charles Seignobos, and André Weiss. The collection, which was designed as part of the French initiative to resist the German invasion, received financial support from the Paris Chamber of Commerce and the French Ministry for Foreign Affairs.

War crimes, a topic addressed by Reiss, were also explored in works from Cruz’s private library, but in this case decried by the other side, that is, by the German Ministry of Foreign Affairs. In 1915, the ministry published a pamphlet in Portuguese that was a racist manifesto against the “Employment, contrary to International Law, of Uncivilized Colored Troops upon the European Theatre of War by England and France.” In this document, military commanders and civilians recount atrocities and narrate the murder of war casualties by foreigners, especially Africans hired by the Allied armies.

Lastly, an item of special interest: “O desastre do Lusitania e os verdadeiros responsáveis” [The disaster of the Lusitania and those truly responsible], a one-page flyer that reports on the torpedoing of the trans-Atlantic ocean liner Lusitania by a German submarine on May 7, 1915. In 1907, when the British vessel was built, it was considered one of the largest in the world. The ship was making its way from New York City to Liverpool when it was hit, killing around 1,200 people.

Some years earlier, Cruz had sailed the same course. After attending the Third International Sanitary Convention in Mexico City and then visiting Washington, D.C., where he met with President Theodore Roosevelt, Cruz had boarded the Lusitania, on December 14, 1907. [DRG5] He was on his way to Liverpool, where he visited the School of Tropical Medicine; he then continued on to London, where he spent Christmas.

On June 15, 1914, Oswaldo Cruz set sail for Europe with his wife, Emília da Fonseca Cruz, and their three children. Traveling with them were one of his sisters-in-law, his mother-in-law, and a governess. They landed in Paris in mid-July. On August 3, Germany declared war on France, forcing them to leave the French capital. Cruz and family departed for London that very day, because he believed they would run fewer risks there. However, the next day, August 4, 1914, the British government, under the command of Prime Minister H. H.enry Asquith, [DRG6] declared war on the German Empire.

Cruz and his family were suddenly and unexpectedly caught in the midst of a world conflict, enduring the hardships of a country at war. In his letters to his son Bento and to his mother, Amália Taborda Bulhões, Cruz often mentions the rumors circulating in London about a possible air strike by German zeppelins. He writes that the city was cast into darkness at night, all street lamps off. Only Hyde Park remained lighted, in the hopes it would be mistaken for the city center, [DRG7] thus diverting any possible attack away from inhabited areas. Writing to his mother on October 22, Cruz said that the family’s return would depend on how the war went, since an ocean crossing would be dangerous right then. He also wrote that the city was safe but “sad”: the leaves had begun to fall; when the sun came out, it was hidden behind thick gray fog; night was pitch-black. Apparently to tranquilize his mother—or perhaps because he believed it himself—Cruz ended his missive by writing “the zeppelins are expected but they haven’t come and I don’t think they will.”

As we know, he was wrong. In the following years, the German Empire’s zeppelins conducted 51 air raids on England, killing 58 soldiers and 500 civilians. The first strike hit the edges of the city of Great Yarmouth, on January 19, 1915. London was attacked on June 1 of that same year. Public opinion was heavily swayed by the use of this aircraft because it targeted civilians, rather than following traditional warfare and restricting fighting to armed combatants on the battlefield.

Cruz was not a witness to the first air strike. He was headed to Brazil aboard the Frisia, a ship sailing under the Dutch flag (the Netherlands was neutral in World War I); he arrived in late January. He had decided to return alone since he felt it would be safer for his family to stay in London rather than undertake an ocean crossing where they might suffer an attack by the German submarines then torpedoing both freighters and passenger ships. Wrong again—perhaps because Cruz did not believe the Germans would actually extend their fighting to cities outside the war zone and drop bombs on civilians.

In a letter to his wife, dated June 9, 1915, Cruz wrote: “I was extremely upset by the news of the zeppelin’s visit to London and therefore I telegraphed you asking you to return. It is no longer safe there. I am not fearful of the result of the zeppelins as weapons of war, but they are capable of causing grave misfortune.” The family escaped the London air raid unscathed and left the city in early July, reaching Rio in late August.